No Sun, No Fun – for Neighborhood Fish 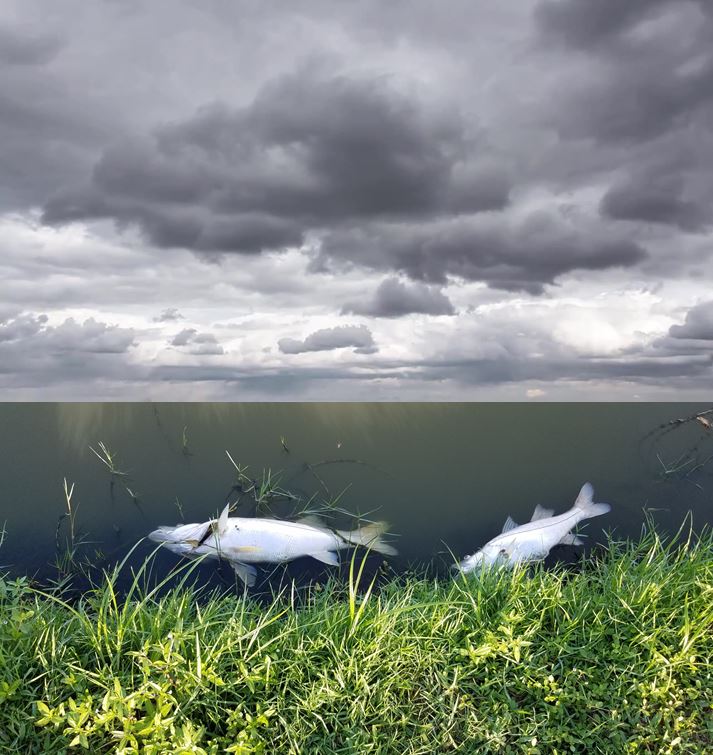 The recent weather conditions we have been experiencing on Sanibel has resulted in several consecutive days of cloudy skies. During periods of prolonged overcast skies), it is not uncommon for a fish kill to occur, especially in waterbodies that are enriched with nutrients (i.e. nitrogen and phosphorus. How would this happen you might ask? The short answer is a lack of oxygen within the waterbody. Here’s why:

Normally, on sunny days aquatic plants and algae add oxygen to water through the process of photosynthesis. During photosynthesis plants use the energy of sunlight to convert water and carbon dioxide into sugars, expelling oxygen as a by-product. This production of oxygen via photosynthesis is critical for the survival of aquatic life (especially fish) in the waterbody. When cloudy skies persist for several days plants and algae are unable to produce the necessary amount of oxygen to support the demand of aquatic organisms –more oxygen is being used than what is being generated—resulting in a fish kill. During warmer months, waterbodies can be more vulnerable to oxygen depletion because warmer water holds less oxygen than cooler water.

Although some fish kills are inevitable, communities do have the power to prevent or limit them by implementing best management practices (BMPs) to improve water quality. BMPs such as aeration, mechanical removal of algae and plants, and shoreline (or littoral) plantings help to reduce nutrient loading thereby improving water quality and increasing oxygen levels. If a fish kill does occur, another BMP is to remove the fish from the waterbody. Fish are loaded with nutrients and as they decompose these nutrients are re-released back into the waterbody. Removing the fish facilitates the export excess nutrients from the system, helping to improve water quality.

A healthy waterbody is generally more resilient and has the ability to better withstand adverse conditions –several days of overcast skies— without resulting in fish kills. Help improve water quality in your lake and save a fish!